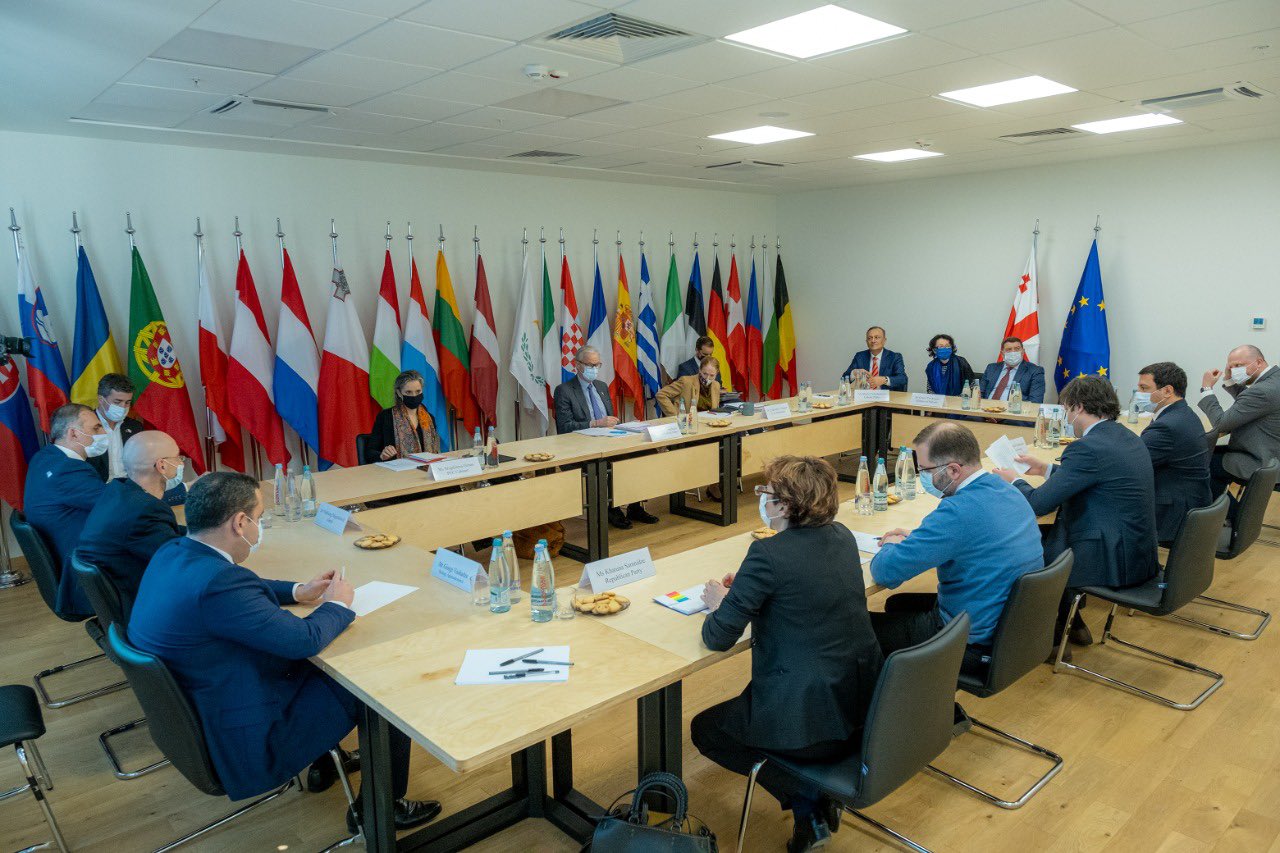 As is known, the opposition party members and supporters in Georgia claim that the October 2020 parliamentary elections were rigged. The political crisis in the country amplified when Nika Melia, the main opposition party leader, was arrested on February 23. People started to rally in the streets of Tbilisi again and even set up tents outside the parliament building. They demanded the release of what they call political prisoners and snap elections. The developments following Nika Melia's arrest will be reviewed in this writing, with a greater focus on the reactions from the international community.

On 1 March 2021, the President of the European Union (EU) Council, Charles Michel, held official talks in Georgia. He brought together both the representatives of the government and the opposition at the negotiating table. The aim was to alleviate the political crisis in the country. In the meeting, it was emphasized that an urgent solution to the political situation should be brought in view of the difficulties in the country’s economic, political, and social fields. Regarding how important the meeting was in finding the solutions to these problems, Charles Michel remarked that there is a political will in this direction between the government and the other political parties.[1] According to Jam News, “large-scale electoral reform to consolidate democracy in Georgia,” “possible early elections/preparation for future elections with local governments,” “political justice/political prisoners issue,” and judicial reform in the country were discussed at the meeting.[2] Following this, Georgian Prime Minister Irakli Garibashvili stated that the early elections are out of the question, saying there are no legal grounds to hold early elections.[3] After the same meeting, it was announced that the next Association Council with Georgia would be held in Brussels in two weeks.

Besides these developments, a scandal that could harm the negotiation process between the government and the opposition erupted in the country. The scandal was about an audio recording of a conversation between Prime Minister Irakli Garibashvili, the head of the special state security service Anzor Chubinizde and Bera Ivanishvili, son of the founder of the ruling Georgian Dream party. The conversation was about how a schoolboy, who used offensive words about Bera Ivanishvili on social media, was intimidated and humiliated. After the record was aired, Ivanishvili did not say anything to deny the record was not authentic.[4] Leaving aside the details of the debate on the record, along with all that happened, the current Prime Minister’s being at the center of these allegations was not interpreted as a good sign of the democratic process ahead of Georgia. The opposition called for an immediate investigation relevant to the claims.

Without being too assertive about a speculative subject relevant to the country's internal affairs, it would be better to continue with the dialogue between the political actors of the country and the representatives of her Western partners. On March 12, Christian Danielsson, a special representative of the head of the European Council, arrived in Tbilisi to mediate between the two parties in Georgia. For a couple of days, he met with the prominent political actors and civil society representatives. Rather than early elections, as a possible option, holding a referendum to ask whether the public wants early elections were discussed during these meetings. However, both the ruling and the opposition parties accused each other of being destructive in the talks and failed to negotiate.

In parallel to this process, the 6th meeting of the EU Association council was held on 16 March 2021. Considering the political climate in Georgia, the meeting was also crucial in showing Western partners’ reactions. In the council, which was chaired by the High Representative of the European Union for Foreign Affairs and Security Policy, Josep Borell reiterated that “overall, fundamental freedoms were respected” relevant to Georgia's latest elections. The necessity to maintain open dialogue among all political actors in Georgia was another emphasis. In the council, where the Georgian peace initiative “A Step to a Better Future” was highlighted, in the course of finding the solution to the latest political crisis in the country and the essentiality of the EU support was underlined.[5]

The reaction of the ruling party to the early elections was quick and the same. While Foreign Minister Zalkaliani clearly stated that it is unthinkable, Georgian Prime Minister Garibashvili indicated 2024, the next and planned election time.

Towards the end of March, the Georgian Prime Minister met with NATO Secretary General Hens Stoltenberg in Brussels. Not only from NATO but also the representatives of The European Parliament and the EU stated their concerns on political turmoil in Georgia. The apparent emphasis in these talks was on alleviating the crisis with Prime Minister Garibashvili's support.[6] Meanwhile, three developments gave the impression of being linked to the political crisis that the country has been through prompted discussion in Georgia. Natalie Sabanadze, Georgian Ambassador to the European Union, announced her resignation on March 21. Two days later, Kakha Sabanadze, the Deputy Minister of Internal Affairs, also announced his resignation on Facebook.[7] Former Prime Minister Giorgi Gakharia, who resigned two weeks ago because he does not share the same idea on Nika Melia's detention with his party, stated that he did not quit politics at all.[8]

A few days ago, the second-round meeting between the government and the European officials came to an end. The special envoy of the European Council, Christian Danielsson, reported that neither the government nor the opposition could agree on the proposed solution (they were partially approved, but the disagreement was on the early elections and political prisoners’ release again). However, he said that the EU would not stop support Georgia in finding a solution to the deep political crisis.[9]

It is evident that Western partners are deeply concerned about what is happening in the country. On the other side, looking through these partners’ eyes, it seems that the continuation of the support from the West depends on the democratic progress in the country. In other words, finding a democratic mechanism to resolve differences requires reforms in judicial, legislative, and electoral systems, besides all other issues in the country. Politicians have a huge responsibility for this as well. However, as it has been for years, furthering the pro-Western course in the country may not be as easy as it seems. The EU is already considering whether to suspend financial aid to Georgia.[10]

[10] “Georgia Leading MEPs react to the refusal of the political parties to reach an agreement,” European Parliament, April 1, 2021, https://www.europarl.europa.eu/news/en/press-room/20210401IPR01301/georgia-leading-meps-react-to-the-refusal-of-the-parties-to-reach-an-agreement.