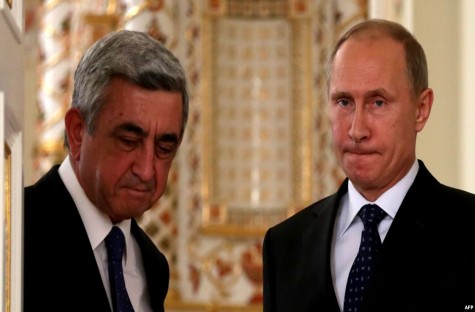 On 10 October 2014, Armenia’s accession treaty to the Eurasian Economic Union (EEU) was signed.[i] This was a surprise to many as the country was on track with deepening its relations with the European Union.  In fact, Armenia’s decision to join the EEU was quickly labeled as a “U-turn” policy because Armenia, like other countries in the Eastern Partnership Program, had been aiming to have closer political and economic relations with the EU, including having a free-trade accord.[ii]

All of this must be viewed taken into account the recent developments in international affairs which point to Russia’s bigger game in the region. As seen in the crisis in Ukraine, which echoes the Cold War period, Russia tries to equalize the influence of the West in the region and, in this context, intends to shake the foundation of its values.  This policy, while creating insecurity and discomfort in the region and in the world in general, once again signaled Russia’s aggressive stance toward European policy in the region that has blocked any resolutions to the conflicts of the region.

The Eurasian Economic Union was born out of Russia’s intention to economically and politically restore its economic and political influence in the former Soviet region. As a part of this assertive policy, Russia has put pressure on the countries in the Eastern Partnership Program to push back EU’s eastern enlargement. It is observed that this renewed focus is in parallel with its new ‘near abroad policy’ which prioritizes the protection of Russian minorities living outside Russia. Thus, with this new concept, Russia has laid the foundations for intervening in other countries in the region.

It has surely contributed to Putin’s willingness to act tough in the region that the West hardly had a concrete reaction to Russia’s invasion of Georgia in 2008, as well as the status of the unresolved conflict in Ukraine today. This has implications on Armenian-Russian relations as well. The situation in Ukraine and Russia’s stance reflect the view that Russia will likely exert greater pressure on Armenia which seems to be caught up between the East and the West.

It seems unlikely for Armenia to be able to pursue a complementarity policy of deepening its relations with the EU for economic reasons while keeping a favored relationship with Russia under the umbrella of an economic union. Besides, it is considered that Armenia did not have the means to make a preference given the influence of Russia over Armenia.

On the one hand, Armenia’s economy is heavily dependent on Russia, the country’s largest trade partner. Russia stands as the biggest investor in the country as well; as it holds the natural gas and electricity sectors among others.  Likewise, the remittances sent back home by the Armenians working in Russia is considered as a valuable asset to the Armenian economy. Besides, Russia’s most powerful advantage over Armenia is its ‘natural gas card’. With Armenia dependent on Gazprom, it politically has not much of a leverage against Russia. In fact, from time to time, Russia raises the natural gas prices which leaves Armenia with no negotiating power toward Russia.  Some analysts stress the view that Russia’s recent offer of reduced prices on its natural gas imports to Armenia might have served as an incentive for Armenia to choose the Eurasian Economic Union over the EU.[iii]

On the other hand, that Armenia would not want to risk its security engagement with Russia must be one of the main priorities behind Armenia’s decision to opt for the EEU. It is considered that Armenia is dependent on Russia in military terms as well. As for guarding its borders, the Armenian military is assisted by a Russian military contingent stationed in Armenia and supported by a Russian base in Gyumri. Likewise, Russia stands as the country’s main security guarantor in Armenia’s frozen conflict with Azerbaijan. In the last couple of years, however, Russia made an arms sale deal with Azerbaijan[iv] which caused further discomfort and pressure on Armenia, which may be coined as Russia using a ‘stick’ against Armenia.

Reactions to these developments reflected the idea that a small country like Armenia was ‘blackmailed’ by Russia to make such a decision.[v] Some analysts in Armenia argued that no public debate took place in Armenia prior to Sarkisian’s surprising announcement in September 2013 on the decision to join the Customs Union, that the process of decision-making was problematic and that this reflected the weakness of the Armenian leadership[vi]. Some, in fact, viewed the whole process as a loss of political sovereignty. Indeed, some groups in Armenia such as the Association of Informed Citizens, called for a referendum on accession stating that accession to the EEU would cease Armenia’s independency on its foreign policy.[vii]

Moreover, there are views that Armenia’s decision would have negative consequences in the internal dynamics of the country. An official from the European People’s Party (EPP) stated that Armenia’s decision weakens the prospects for democracy in the country and further increases the risk of Russia’s influence in the region[viii]. This is in parallel with the argument of an Armenian analyst, Richard Giragosian, who stated: “The two most obvious beneficiaries are the oligarchic system and corruption.”[ix]

Despite the developments, Armenian officials have indicated that they are willing to continue deepening relations with the European Union. President Sarkisian stated that Armenia was willing to continue to have close cooperation with the EU in different directions: “It is important for our partners to know that we will never set this against our dialogue with the EU. That will continue since we have numerous coinciding interests and a common heritage, the basis for our continuing process of democratic reforms”. [x]

In response, EU officials stated that Armenia’s preference over the Moscow-led bloc ruled out its chances of signing a free trade agreement with the European Union. They further stated that EU would have relations with Armenia, but not in European terms. In fact, it is a well-known fact that a country cannot enter both organizations at the same time because each have different tariff requirements that are incompatible; thus, it is technically not possible.

While one would expect that Armenia’s relationship with the EU would be limited due to its closer relations with Russia, the latest developments are surprising. It is reported in the media that Armenia intends to complete an updated version of a European Union Association Agreement.[xi] First Deputy Economy Minister of Armenia stressed that Armenia will hold-on to the free-trade from the Association Agreement while “amending the points that are subject to change due to the EEU commitments”. [xii]Armenian officials indicated that renewed steps were being taken to formalize Armenia’s cooperation with the EU. Likewise, it seems that the EU is materially ready to keep its promise regarding its relationship with Armenia. In November, it pledged to provide up to 170 million euros through 2017 to Armenia for reforms particularly in the justice sector.[xiii] In January, it allocated 77.5 million Euros for agricultural, anticorruption and civil-service reform projects.

While Armenia is aware that it cannot compromise its security relationship with Russia, it may be in the view that it should not miss the economic opportunities offered by the EU. Moreover, it seems that, as much as the EU is aware of the fact that it lost Armenia to the sphere of influence of what was once called the Eastern bloc, it would not want to lose its hold on the country yet. Being aware that Russia’s influence in the country will likely be even greater, the European Union continues to use ‘carrots’ on Armenia, as it recognizes the view that that promoting democracy and rule of law in the country is a way to exert influence on it.

Armenia’s policy of playing a double game have been met by reactions both by the Russian side and the West.

Firstly, Russia’s stance toward this policy has visible effects in internal politics of Armenia. In fact, the recent tension between President Sarkisian and Gagik Tsarukyan, head of Prosperous Armenia Party (PAP), reflect Russia’s unease. Following Sarkisian’s aggressive speech toward Tsarukyan, an oligarch known for his close relations with Russia, he called for regime change in Armenia which further increased tensions.[xiv] Furthermore, Russia’s conduct towards the Armenian Prime Minister Hovik Abrahamyan and his delegation who visited Moscow last week reflected its stance as well. In his visit to attend a meeting of the Eurasian Intergovernmental Council, Abrahamyan was hoping to negotiate with Russian officials for reduced prices of gas. Diplomatic protocols reflect that a Prime Minister, in an official visit to a country, gets accepted by their counterpart. Abrahamyan’s visit to Moscow was named a total “fiasco” as he did not manage to meet anyone in Moscow regarding his demands.  Both of these recent incidents may be considered to mirror Russia’s warnings to Sarkisian regarding his efforts for Armenia’s policy of keeping foot in both camps.

Secondly, Armenia’s relations with the US seems to have been shaken to some extent by its policy of opting for the EEU. While it is reported that Armenia-NATO relations will likely deepen[xv], it seems that the US intends to decrease economic aid to the country. The Obama administration’s recently released budget proposal for 2016 verifies this reduction.[xvi] If it is approved by the Congress, the budget reflects a record low in such aid to Armenia.

This brings up the question whether the US’s move is a reaction to Armenia’s choice of joining the Eurasian Union over the EU and a part of the tensions between East and West. The US administration may be in the view that Russia may want to use Armenia as a gateway since its economy is under the threat of sanctions imposed by the West over the Ukraine crisis. The idea that economic aid sent to Armenia may find its way to Russia could be the rationale behind lowering their economic assistance.

* This article was also published in Turkish: http://www.avim.org.tr/analiz/tr/ERMENISTAN%E2%80%99IN-SECIMI:-DOGU-YA-DA-BATI/3908

[i] The Eurasian Economic Union was created on 1 January 2015 with four founding members, Russia, Belarus, Kazakhstan and Armenia. A bloc led by Russia, the EEU is intended to boost cooperation between the countries in the region. The EEU envisions free movements of goods, capital, services and people and envisions a single currency and its own supranational institutions.

[ii] First signal of this change was in September 2013 when President Sarkisian announced following a meeting with Putin in Moscow that Armenia broke talks with the EU and that it would rather join the Russian-led Customs Union.

[xiv] A civic activist named Artak Khachatryan, who had played a leading role in protests against the government’s new tax law, was kidnapped and beaten by three masked men on 7 February. Prosperous Armenia Party (PAP) led by Tsarukyan blamed the ruling regime and encouraged the public for protests. This led to a tension between President Sarkisian and Tsarukyan.

[xv] During NATO Secretary General’s Special Representative’s visit to President Sarkisian in January, as well as Deputy Foreign Minister’s visit to Brussels in February, officials on both sides stressed that they desired to continue deepening political dialogue and cooperation.