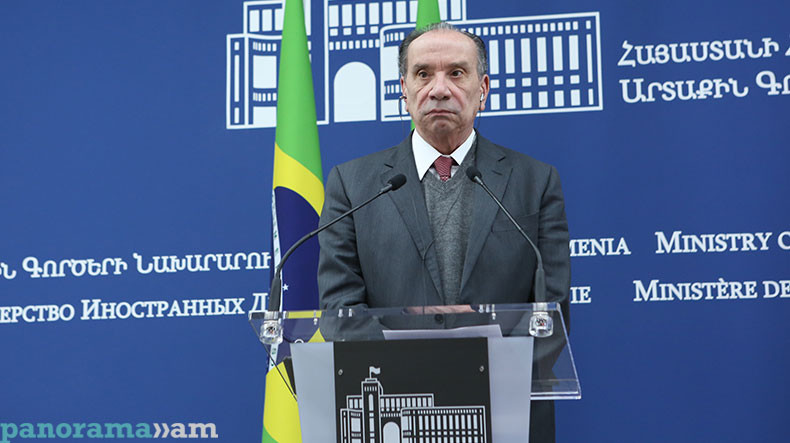 A couple of days ago, the Minister of Foreign Affairs of Brazil Aloysio Nunes Ferreira made a visit to Armenia to improve bilateral relations. During his time in Armenia, Minister Ferreira also visited the memorial of the so-called genocide. After reviewing the news piece by Armenia’s official news agency ArmenPress, it can be observed that in his statement after visiting the memorial, Minister Ferreira did not use the word “genocide” and instead referred to the events that took place in 1915 as “terrible events”.[1]

It appears that some Armenian press organs have deemed Minister Ferreira’s words as being insufficient, because they have published his statement with alterations; his statement has been altered to make it seem as if he had used the word “genocide”.[2] Yet, according to ArmenPress’s own statement, struggling against “Turkish denial” is one of the main aims of this institution.[3] For this reason, if Minister Ferreira had really used an expression concerning genocide, ArmenPress would have certainly mentioned it.

This prudent conduct demonstrated by Minister of Foreign Affairs Aloysio Nunes Ferreira as a representative of Brazil has at the same time revealed once again that genocide resolutions adopted in parliaments are nothing more than non-binding, political statements. In connection to this, two years ago, the Brazilian Senate had adopted a genocide resolution, but the Brazilian Government had declared that the said resolution had no binding effect in terms of the Government. With Minister Ferreira’s statement, the Brazilian Government’s constructive position regarding the Turkish-Armenian controversy has once again been demonstrated.