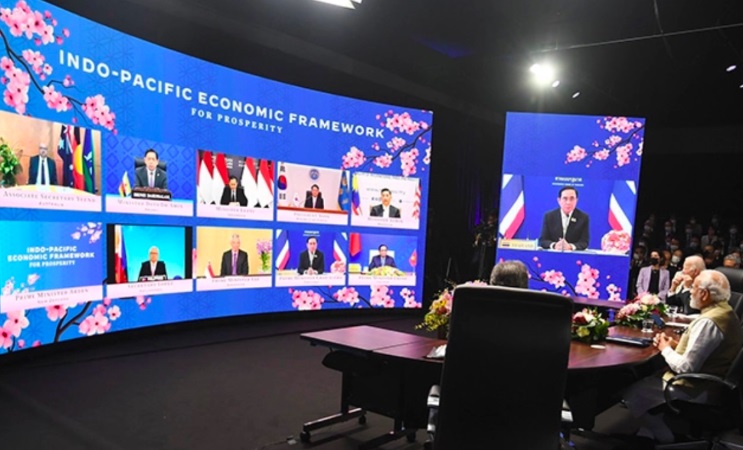 On May 23, 2022, Indo-Pacific Economic Framework (IPEF) was announced, comprising 13 members which are the United States, Japan, India, South Korea, Australia, Indonesia, Thailand, Singapore, Malaysia, Philippines, Vietnam, New Zealand and Brunei. The US-led initiative aims to create an open, interconnected, and secure Indo-Pacific for the sustainable growth of the region. This framework is designed to deliver significant advances for sustained growth, peace and prosperity in the Indo-Pacific region and aims to deepen economic participation among partners in a free, open and inclusive way.

In October last year, US President Joe Biden pointed out this economic framework at the East Asia Summit and said:

“The United States, together with its partners, aims to develop an Indo-Pacific economic framework that will define our shared goals in procurement, raising standards for trade facilitation, the digital economy and technology. A framework that will encompass chain flexibility, decarbonization and clean energy, infrastructure, labor standards and other areas of common interest will be announced.[1]"

As a matter of fact, this framework, which Biden announced during his visit to Japan within the scope of the Quadrilateral Security Dialogue (Quad) summit, is primarily seen as a tool to oppose China’s economic superiority in the region, and deals with important economic and commercial issues concerning the region, such as strengthening the relations of the participating countries and re-building supply chains damaged by the pandemic. From Beijing’s perspective, these efforts are seen as a direct challenge. Targeting this economic program, Chinese Foreign Minister Wang Yi said that “China has always enjoyed projects related to regional cooperation, but opposes any initiatives that will disrupt relations by creating division and conflict”.

In addition, a new initiative called “Indo-Pacific Partnership for Maritime Domain Awareness (IPMDA)” has been created during the Quad summit to work with partners in the region and combat humanitarian and natural disasters and illegal fishing. This initiative, which encourages the stabilization of the Indo-Pacific seas, intends to reduce the risks faced in the Pacific Islands.

While the United States has previously tried initiatives to strengthen economic ties with the region, such as the Comprehensive and Progressive Trans-Pacific Partnership (CPTPP), former US President Donald Trump withdrew his country from the CPTPP in 2017.[2] Since then, the US has been missing an adequate economic and trade strategy to counter China’s growing economic influence in the Indo-Pacific. Only AUKUS, which is established as a strategic alliance between Australia, the United Kingdom, and the US to build a class of nuclear propulsion submarines, became an option to create a competitive opportunity for the rise of China economically in the Indo-Pacific region.

IPEF developed as a proposal for the US to assume a larger economic role and to balance its security provider role in the region. The framework is important as it allows the US to regain credibility in the region following former US President Trump’s abrupt decision to have his country withdraw from the CPTPP. Unlike the CPTPP, IPEF was presented as a more specific mechanism seeking the benefits of trade partnerships while protecting member states from certain negative aspects of trade liberalization. The role of the Quad in the signing of this new economic framework is undeniable.

Although the US attempts to strengthen economic ties with the region, such as the CPTPP, have not been successful; IPEF competes to be effective. Meanwhile, China has concluded another trade agreement called the Regional Comprehensive Economic Partnership (RCEP), which includes fifteen Asia-Pacific countries but excludes the US, one of the largest trading blocks in the world. In this context, the development of trade in the Indo-Pacific region is at a new stage in the struggle for a share in trade. As such, the US needs to activate the new economic framework and other planned initiatives in order to make its promises credible and ensure its effectiveness in the region. In this context, it is hoped that IPEF could play an important and effective role.

[1] Kim Bo-eun, “What is IPEF, and will it help the US counter China’s influence in the Asia-Pacific?”, SCMP, April 14, 2022, https://www.scmp.com/economy/china-economy/article/3174211/what-ipef-and-will-it-help-us-counter-chinas-influence-asia