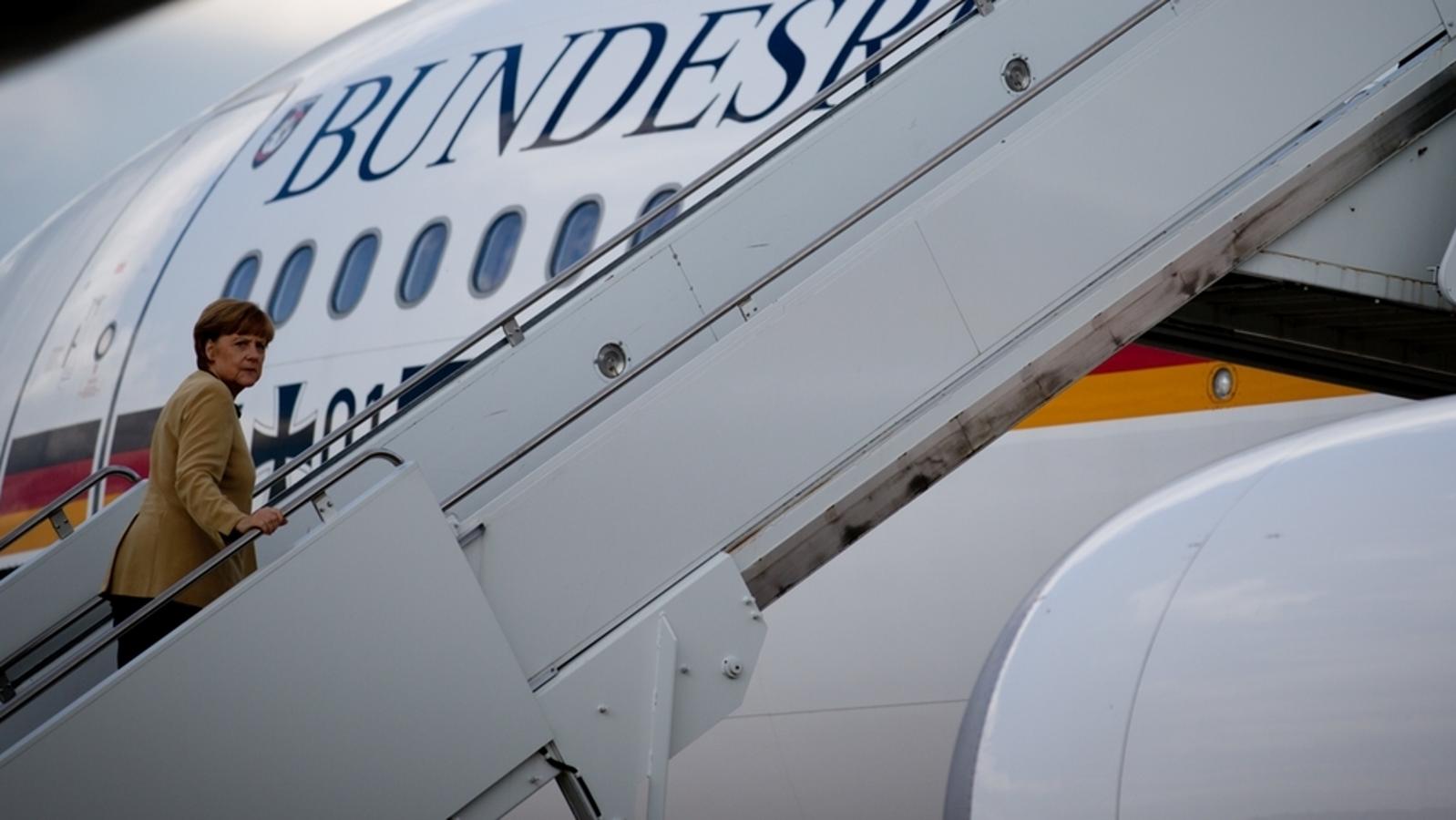 The Federal Chancellor of Germany Angela Merkel has visited the three South Caucasus countries of Georgia, Armenia, and Azerbaijan between the dates 23-25 August 2018.  Certain international media sources (such as Sputnik) characterized the visits as “unprecedented”.[1] In this respect, just before these visits, we witnessed comments and analysis regarding the second meeting in three months between Merkel and President of Russia Vladimir Putin on 18 August in Meseberg outside Berlin. It is reported in the international press that bilateral issues focusing on energy and the Nord Stream 2 gas pipeline were also up for discussion in the meeting.[2]

Interestingly, the European Council for Foreign Relations (a pan-European think tank originally funded, among others, by George Soros’s Open Society Foundation) has published a remarkable analysis regarding the said meeting and Merkel’s visit to South Caucasus with a title referring to the popular US television series of Breaking Bad. an inappropriate and a disrespectful resemblance of the “Breaking Bad” character of Walter White with Ms. Merkel by using the following quoted language:

“In an international order that is beginning to resemble a competition between rival cartels, Angela Merkel risks becoming a kind of geopolitical Walter White.

In the popular television series Breaking Bad, Walter White, a chemistry teacher recently diagnosed with terminal lung cancer, fears that his family will be unable to afford his treatment or to provide for themselves after he is gone. In despair, he starts to produce and sell drugs -beginning his descent into a spiral of crime ostensibly intended to sustain his business and protect those he loves. His noble cause eventually morphs into a criminal rampage that does more harm to his family than poverty and cancer ever could. To some observers, German Chancellor Angela Merkel – known for her tough stance on Russia sanctions – may have begun a similar descent at a recent meeting in Meseberg with Russian President Vladimir Putin.”

The analysis goes on by referring to Merkel’s visit to South Caucasus and states that:

“Merkel explored efforts to revive the Southern Gas Corridor when she visited Georgia, Armenia, and Azerbaijan just days after her meeting with Putin. This proposed project would reduce European dependency on Moscow and could help stabilize Turkey, as the country would gain a more important role in the European energy supply chain.”

The analysis ends with the earwigged warning that:

“Merkel risks becoming a kind of geopolitical Walter White – a tragic figure who strikes increasingly murky deals to protect those she loves, hoping that somehow things will work out. In an international order that is beginning to resemble a competition between rival cartels more than the rules-based system the West once envisioned, another well-meaning chemistry teacher faces a series of ever more dramatic predicaments.”

According to personal web page of the Federal Chancellor Merkel, the South Caucasus countries of Georgia, Armenia, and Azerbaijan are covered by the European Neighborhood Policy and have been part of the EU’s Eastern Partnership since 2008/2009. Georgia signed an Association Agreement with the EU. The German government is reportedly interested in seeing the region develop positively and is working for democracy and the rule of law in these states. It is underlined in the web page that at the start of her visit to Tbilisi, the Chancellor stressed that she is an advocate of the territorial integrity of Georgia and the German government continues to support efforts to achieve a peaceful solution to the conflicts in Abkhazia and South Ossetia. She also stressed that Germany will endeavor to do whatever it can to resolve these conflicts. At a press conference with Georgian Prime Minister Mamuka Bakhtadze, Merkel also pointed out that two financial cooperation agreements are to be signed, worth a total of 193 million euros. This sum will be used to build a gas storage facility and to help upgrade drinking water supply and sanitation systems, among other projects.

Per the said web page, the next stop on Merkel’s itinerary was Armenia. It is mentioned that Armenia and Azerbaijan have for decades been locked in a conflict over the Nagorno-Karabakh region. The Minsk Group, co-chaired by France, Russia and the United States, is the international platform for discussions aiming to identify possible solutions and Germany, with its EU partners, supports the negotiations of the OSCE-led Minsk Group and the engagement of the EU Special Representative for the South Caucasus.

Merkel’s visit in Yerevan to the memorial related to the 1915 events is reflected in the web page of the Federal Chancellor as follows:

“Chancellor Angela Merkel’s visit to Armenia began at the Tsitsernakaberd Memorial, where she laid a wreath. ‘As friends and partners of Armenia, we Germans are very much aware of the atrocities suffered by the Armenians in 1915 and the years that followed,’ said the Chancellor. This suffering will not be forgotten. Germany will do its bit to ensure that.”

According to the same web page, in Azerbaijan, Merkel met with President Ilham Aliyev to discuss relations with Germany and the EU, energy supplies, and human rights. The Chancellor underscored the importance of Azerbaijan in the energy supply sector and underlined that the Azerbaijan is "an important factor for the European Union in moves to diversify the sources of our energy supplies". Referring to “the conflict over the region of Nagorno-Karabakh, which has divided Azerbaijan and neighboring Armenia for decade.”

Merkel underscored the fact that "It is in Germany’s interests that this conflict be resolved."[3] It should be mentioned that Azerbaijan has rightfully refused to allow German lawmaker Albert Weiler to accompany Chancellor Angela Merkel on trip to Azerbaijan because he had previously visited the occupied region of Nagorno-Karabakh without Baku's permission.[4] His attempted inclusion to Merkel’s delegation cannot be considered to be an innocent oversight.

As it can be understood from the above-mentioned formal statements of Germany, Merkel’s visits to Georgia and Azerbaijan are mostly reflected with a language emphasizing economic considerations and which brings to the fore the geostrategic importance of the said countries. It is apparent that the energy supply of Europe was the number one issue during the visit. In fact, Azerbaijan and Georgia are the key countries that form the transport corridor between the Caspian and the Black Sea. Energy and transport links leading to Europe began to be laid through these two countries. They will be a bridge between Europe and the markets of Central Asia and China, thanks to Baku-Tbilisi-Kars railway.[5]

It seems that Germany, with Merkel’s visits to Azerbaijan and Georgia, is seriously exploring the options to Nord Stream-2 gas pipeline. It would be opportune to read this move with the recent call to Europe of the German Foreign Minister Heiko Maas to create a payments system independent of the United States which could help keep alive the nuclear deal with Iran following the withdrawal of the US.[6] These developments may be considered as indications that Germany, taking into account its national interest and also the interests of the EU, is trying to pursue far-sighted policies in the South Caucasus. In fact, the latest landmark deal among Russia, Iran, Azerbaijan, Kazakhstan, and Turkmenistan on how to divide the Caspian Sea is also an important development. This deal might bring in the future the possibility to transport Turkmen gas also to Europe through Azerbaijan and Turkey. In short, the latest visits of Merkel to the South Caucasus countries and especially to Azerbaijan and Georgia seem to deserve to be qualified as strategic visits to a geopolitically important region.

As for the visit of the Merkel to Armenia, it seems not possible to state the same. There is no a special mention at all to the geostrategic importance of Armenia in the statements. We also see no clear references to specific agreements with Armenia; there is only a mention made to finding of a solution to the Nagorno-Karabakh issue. As such, concerning Merkel’s visit, it is no surprise that the Armenian press mainly dealt with the issue of her characterization of the 1915 events. As can be gathered from above, she did not use the word “genocide” for the 1915 events. It is alleged and reported in the certain media outlets that she characterized the said events as “heinous crimes against Armenians”. According to Deutsche Welle, she also stated that she had visited the memorial “in the spirit of the Bundestag 2016 resolution” and “clarified that the language used was a political, not a legal classification.”[7]

However; one must take into account the recent developments about Germany being in serious legal trouble in relation to the substantiated accusations made and legal actions taken by Herero and Nama peoples of today’s Namibia that the German Colonial Rule from 1904 to 1908 in the-then South West Africa committed the “first genocide” of the 20th century against the Herero and Nama peoples. As such, it is not possible for Germany either to defend its Bundestag 2016 resolution or to characterize such tragic historic events arbitrarily and illegally as “genocide”.

Furthermore, Merkel’s pronouncements in Armenia as regards to the First World War events is also a reflection of her Christian basis and bias in favor of Armenia. Yes, many perished in those years on that front, and it is not wrong to share the grievances of Armenians. However, also equal or more in number of Turks and Muslims also perished, many suffering atrocities at the hands of Armenians. As such, Merkel’s omission of the other side of the coin and unjustifiably supporting the distorted Armenian narrative reveals yet again where and how Germany stands. As such, Merkel loses her chance to fulfil her ambitions in the Caucasus.

Finally, it should be underlined that Germany’s interest to the Caucasus is not new. As we are commemorating the centennial of the founding of three South Caucasus states this year, the German involvement in the shaping of the Caucasus in those years also come to historical perspective. Unlike what some sources have reported, Merkel’s visit to the region is not unprecedented, to the contrary, it is a contemporary testament to the continuity of the traditional German aspirations in the region.