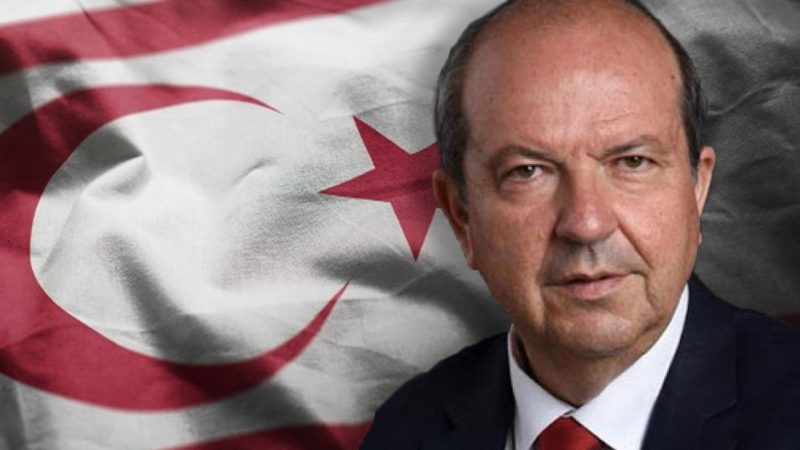 In this competition, the sovereignty of the Turkish Republic of Northern Cyprus (TRNC) is the most serious obstacle to the Western imperialist power that wants to monopolize the resources of the region. However, the sovereignty of the TRNC does not only serve as a fortress against the robbery of eastern Mediterranean resources and the siege of Turkey from the south. TRNC, as an independent state, is facing Atlantic’s attack against the entire Eurasian geography, at the front as an outpost line of resistance.

In this regard, the issue of the sovereignty of the TRNC today coincides with the issue of the security of Eurasia. However, while no one in the world denies the existence of the TRNC, no state officially recognizes it (except Turkey). The upcoming period will put the solution of this contradiction on agendas of the Eurasian countries.

And, on this day, which is celebrated as 20 July Peace and Freedom Day, we referred our questions to the Prime Minister of the TRNC, Ersin Tatar.

“THE TURKISH CYPRIOTS WOULD BE DESTROYED”

Mehmet Perinçek: What would the Turkish Cypriot people face if Turkish Army had not carried out the Cyprus operation?

Ersin Tatar: The only reason for all the unrest, conflicts and wars on the island, both during the Ottoman and British periods, is the dream of putting Greek Cypriots and Greek island under Greek hegemony.

Greek-Greek Cypriot duo, still today, cultivate this impossible dream in their schools to the youth and sow seeds of hostility.

No one should forget that Cyprus is a Turkish country since 1571. The island was rented to the British in 1878.

If it hadn’t been or wasn’t done, the Turkish Cypriots would be destroyed. The clearest proof of this is what happened on the island of Crete and in Cyprus with mass graves in Tashkent, Atlılar, Muratağa, Sandallar. Members of Greek Cypriot terrorist organization EOKA turned the island of heaven into a bloodbath. If the motherland and Guarantor Turkey did not intervene at the right time it is sure that all the Turkish Cypriots would suffer the genocide and be destroyed.

Mehmet Perinçek: Do you see the possibility of Turkish Cypriots and Greek Cypriots living together again? In this context, what are your opinions on the federal and two-state solution?

Ersin Tatar: Greek and Greek Cypriot duo even today despite all atrocities did not give up, did not take the necessary lessons and they still dream of making the island Greek. They follow the impossible Megali Idea and plan for Enosis. As you know the negotiations on reunification of the island with an equal partnership between Turkish and Greek Cypriots with the aim of a Federal State of Cyprus has not been possible due to the reasons I mentioned above. The Greek Cypriots overwhelmingly, voted against the Annan Plan Referendum in 2004 while the Turkish Cypriots voted for the formation of a united federal state. The Greek Cypriots has been following a policy against any kind of equal, just and sustainable solution to the Cyprus problem.

The Greek Cypriot leader Mr. Anastasiadies destroyed The Cyprus Conference in Crans Montana in June 2017 aimed at ending the four-decade division of the island of Cyprus. Because of Mr. Anastasiades’ maximalist requests and uncompromising attitude the Talks have closed without reaching an agreement. Since then, all the positive steps taken and the invitations for cooperation by the Turkish Cypriots and mainland Turkey are rejected by the Greek Cypriot Administration. As long as Mr. Anastasiades and Greek Cypriots maintains their hostile politics and the imperialist west supports it, it will not be possible to find a solution to the problem. ‘The federal solution’ cannot go beyond a dream that cannot be realized. Under the present circumstances the best solution is a two state solution with two peoples living side by side in peace or a confederal solution with equal sovereignty.

Mehmet Perinçek: The meaning of TRNC for Turkey, is indisputable. So, what is the importance of protecting the sovereignty of TRNC in terms of regional countries and Eurasian geography?

Ersin Tatar: TRNC unfortunately is not a member of the UN and it is only recognized officially by our mainland Turkey. However, other UN members and institutions of the EU have established relations with TRNC unofficially using different means. On the other hand, TRNC functionalizes its foreign affairs on political, economic and social spheres through Turkey or through its recognized institutions like Chamber of Commerce etc. Mainland Turkey is the Guarantor power and our rights arising from international agreements have been and are protected by Turkey.

The continuous attacks by the Greek Administration to undermine the realities of the island, that there are two ethnically different peoples on the island and that the Turkish Cypriots have a sovereign state in the North of the island does not benefit the peace and tranquillity environment in our region. Greek Cyprus Administrations’ military and security collaborations and evil alliances targeting TRNC and Turkey is not beneficial for anyone. The Greek Cypriot leadership, is continuously refusing to share power and prosperity with the Turkish Cypriot People, acts under the illusion that it is the only authority on the island who has right of say at the expense of our rights.

We cannot accept this kind of hegemonic, diseased thoughts and impositions. The Turkish Cypriot side has made multiple calls and proposals for cooperation between the respective sides of the two peoples, which have equal co-ownership rights on the island and in the Eastern Mediterranean. Mr. Anastasiades should understand that by fuelling the crisis of confidence between the Turkish Cypriot People and the Greek Cypriot People will have an adverse effect on regional stability. The Greek Cypriot leadership is gravely mistaken if it believes that the evil cooperation and partnerships with regional or non-regional actors will lead us to forgo our rights and interests. It must be known that we will continue to protect our rights and sovereignty under all circumstances.

“CONTACTS CONTINUE FOR THE RECOGNITION OF TRNC”

Mehmet Perinçek: Recognition of the TRNC by other countries in the coming period depends on what circumstances? Are such steps taken?

Ersin Tatar: The failure of the attempts for a just, acceptable and sustainable solution in Cyprus may lead us to permanent separation. Negotiations are underway for a partnership Republic on the basis of sovereign equality but the intention of the other party is a deal full of traps. There is no ground for an agreement in Cyprus any time soon. Contacts and initiatives continue for the recognition of TRNC. Despite all of unjustified embargoes applied to TRNC our success continues. The most important countries of the world accept the reality of TRNC.

Mehmet Perinçek: The Eastern Mediterranean has become one of the important centres of energy rivalry. Would you evaluate the confrontation here?

Ersin Tatar: As a result of Turkey’s agreement with Libya a new map emerged. Turkey is the only country with nearly 2 thousand kilometres of Mediterranean coastline. With this map, it is seen that the Greek-Greek Cypriot duo are unfair to Egypt or even Israel. According to the Law of the Sea, a tiny island country cannot have such demands. 1960 agreements is obvious. Both Turkish Cypriots and Greek Cypriots have rights in the region.

TRNC’s rights and interests have been protected by mainland Turkey. Libya’s rights will also be protected. Disputes in the region should be resolved through dialogue. Greek Cypriot Administration’s stubbornness of managing the energy resources solely is unrealistic. Our cooperation offer for extracting oil and natural gas resources together with the Greek Cypriots is still on the table. If the Greek Cypriots continue to reject our offer then Turkey will continue to carry out exploration and drilling activities licensed by the Government of the TRNC to Turkish Petroleum Corporation (TPAO) on behalf of Turkish Cypriot people. It is not possible for the Turkish side to take a step back in exercising its rights. If they drill, we will also drill.

Mehmet Perinçek: What does the TRNC offer to foreign investors?

Ersin Tatar: As all the world is fighting with the deadly coronavirus our main target is to defend our leading sectors of our economy, such as higher education and tourism. I hope within several months the adverse economic conditions caused by the pandemic will disappear and people will start travelling to TRNC as before. Our country, which is reliable in terms of health, can be a centre of attraction for all foreign tourists and investors. We have all the necessary laws and regulations protecting the rights of foreign investors and we do have good incentive packages that make foreign investment easy.

“MARAS WILL BE OPENED IN ACCORDANCE WITH INTERNATIONAL LAW”

Mehmet Perinçek: What are the consequences of opening the (Closed) Maras? What about the status of legitimate (property owner) foreigners and Greeks?

Ersin Tatar: We have decided to re-open Maras, which has been closed for the last 46 years. According to the records of the Foundations Administration, Maras was Ottoman land and Turkish property. We will follow a policy by re-opening Maras under TRNC administration through the Immovable Property Commission, returning the properties to its former owners and residents.

Maras will be opened in accordance with international law. Although the efforts to re-open the Maras due to the epidemic have been disrupted, a number of works and projects are currently underway. With the opening of this place, our tourism as well as TRNC will be strengthened